Cooler “fur sure”.  Not as wet and sloppy as one might hope for crawling on the ground.

Played lots of Black Hawk Down soundtrack in my vehicle, but then decided more of a traditional, cohesive warm up was necessary.  Moseyed to the great hall and decided we better get it on:

When we got tired of this and heart rate was significantly raised, it was time to crawl.  I distinctly recall 3 experiences I have had crawling in my military career or as the army calls it the “low crawl” and the “high crawl” 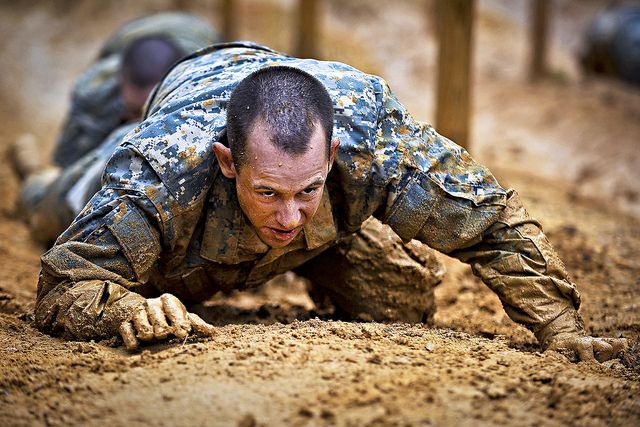 The first was in Sand Hill (where the mud is really is 18″ deep) when you crawl under the wire in the dark while they fire an M60 over your head.  Of course in all the fun of it you are surely convinced that they are firing that thing 6″ over your head.  The reality is they suddenly flipped on the lights when we did it and sure enough one “private” was caught in the midst of a full on sprint – he was then on known only as Jesse Owens.  The second was in OCS (which if you have never experienced is a real hoot) when they made us crawl in freshly hosed down trench every time we tried to go to chow.  The third was when in all my brilliance I led a young PL out into a field to point out a plume of smoke coming out of the nearby woodline only to discover that it was the kick off to an ambush and the PL and I were suddenly surrounded by a barrage of gunfire that literally made us hit the deck so hard the poor PL broke off his front tooth on the buttstock of his weapon.  He yelped so loud I thought for sure he’d been shot.  I tried to crawl over to him but he wisely pulled a Jesse Owens (see above) and sprinted for the rest of our patrol and dove into a ditch.  I on the other hand crawled my way to the ditch which in retrospect was far stupider, but apparently I put on quite the IMT clinic.  Whew that was a long story.

Anyway, staying in our teams the first pax sprinted to the middle cone and set up in a low plank.  The next pax sprinted and hurdled the low-planker and set up next to him in the low plank and so forth until all pax were in railroad-style fashion in low plank.  Upon the last man getting in low plank, all pax moved to the high plank and the first man crawled underneath the line of pax.  This repeated until all pax were standing.  Rinse and repeat in reverse order.

Circle up in teams.  One pax calls out an exercise and team performs while the pax to his left sprints the circle around the field.  Repeat until everyone has run.

Getting bored of this we move on to the best part – playground games.  Duck duck goose – F3 style.  All pax circle up – the bigger the circle the more fun it could be!  All pax get down in high plank, accept me.  I get to run around the circle and tap legs with the proverbial duck, duck…..goose.  I pick Lutefisk, which on his worst day runs a 4.5 40 (of course so does my grandmother, but she is 6’3″ and 250 lbs).  We run around the circle and he catches me about a quarter of the way.  Unfortunately for him, we aren’t playing in the old school playgrounds of yesteryear

and everyone is a winner

so he is “it” and the process repeats itself.

Shared my common theme of growth and change.  It’s coming to a theater near you.  Finished up with the Circle of Trust and Ball of Man.

Yeah we had that.