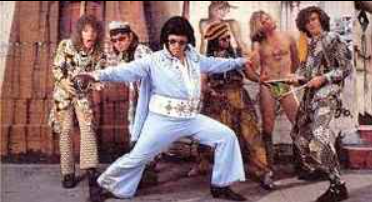 PAX circles up and counts off into 1’s and 2’s
For the entirety of the beat down group 1 must talk like a pirate and group 2 must do Elvis impersonations.

The Thang – The dredd pirate Elvis

PAX moseys to the library parking lot where there are two stations spaced 30 yards apart.
Station 1 is labeled “Away boarding party” and station 2 is “Viva Las Vegas” and each has a list of exercises. The PAX will perform the exercises in order then scream “Away boarding party” or “Viva Las Vegas ” while sprinting to the opposite station. All mumble chatter must be as Elvis or a pirate.